Most Items Less $$ Than Etsy

I actually like HostGator as a hosting company, but I need to vent because something they did (or rather, did not do) last year affected my website traffic.

It’s that time of the year, again, when hosting fees are due. For years I had my hosting with Network Solutions. They were a good company when I signed up in 2006, but slowly they went downhill. It started with the site constantly going down, and ended with not being able to talk to someone in The States about technical issues — which, itself, isn’t a problem if the person knows how to fix it. But when their go-to response is something too simple and then you find that is their only response, it’s a problem.

I started this site in 2015. I had others and in 2016 I decided to bite the bullet and change hosting. By then, Network Solutions costs were outrageously expensive and the service was bad. In fact, I turned auto renew off and over one month before my hosting was up they charged me for a full year, anyway. I was happy to call them and insist they refund my money and expect never to hear from me again.

HostGator had great pricing and offered one free SSL certificate for the first year. Great! Everything went without a hitch and it seemed everything I could hope for in a new hosting company.

Last year I renewed my hosting and also renewed my SSL certificate for this website. What they failed to tell me, was that they don’t automatically renew your certificate; that it is a separate step you have to take to make sure – even though I paid for it – that it doesn’t lapse. So, in the middle of moving and a number of other things going on in my life – and receiving no new notifications – I thought it resolved and forgot about it.

About a month later, when I was finally able to visit the site and consider making some updates and adding new content, I went to my site and this huge disclaimer popped up warning me not to visit my site for fear that my computer would be infected with malware. [Screen grab with actual text below.] So, not only was my SSL certificate not working, but HostGator was actually encouraging visitors to go away and even be afraid of returning to my site! I was livid!! I called them immediately asking what the frack was going on, and the guy actually says to me, “Yeah we’ve been complaining to the company for a long time that they should send notifications about expired SSL certificates.” Huh. So they use a third party company for SSL certs and therefore have no control over how this company handles expired – but paid for, mind you – SSL certs. 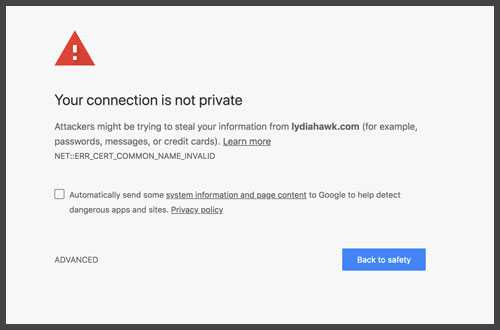 I write this because I will have to go through this process again this year, if I decide to stay with HostGator. And the memory makes me shutter, because it seems like a good company, otherwise. Well, they also use a third party company for site backups, which are always too full and unable to backup and constantly trying to squeeze money out of me to upgrade, but I digress. I try to manually back up my own sites, so it’s not the most pressing issue.

So there… I lost a lot of traffic after that happened, and rightly so! If I went to a website that told me to run screaming and pray that my computer wasn’t infected with malware – like the site had definitely been hacked by the most nefarious deep web cretins on the planet – I wouldn’t go back to that site, either. It seems dramatic but that is what the disclaimer made me feel like. I immediately worried that my site had been hacked. It was a huge, alarming, red-letter message that caused me instant stress. I understand warning a visitor if there’s a problem, but a site that simply doesn’t have an SSL cert where it once had does not seem to me like the kind of situation that warrants that level of deterrent messaging. And not only that, when I do look up “Best Hosting 2018” on Google, HostGator is still at the top of the list, but no one mentions the SSL issue or the backups issue. Most of the top links are probably getting paid to advertise, but still. Call me crazy but that’s kind of a big deal when you spend a lot of time and effort building traffic on your site.

[I have since changed hosting and won’t sing anyone’s praises until I’m actually happy, but I found a great resource for best hosting at www.WhoIsHostingThis.com. Definitely shop around and find reviews. Even though HostGator is at the top of some lists, it is not at the top of this site’s 2018 list.]

Hey, all kitten aside, will you be meow Valentine?