Most Items Less $$ Than Etsy

Degalodi was a faint dream in 2012 after going to Paris for ten days.

You see, I’m a Francophile. Have been since I was roughly twelve when a friend’s friend spoke French to me. Being from Texas, I should have learned Spanish. That would have been the prudent move, but after hearing French, I fell in love. After that I only cared about learning French and going to France and maybe spending a few years there, at some point.

I’d been a few times already, but this was my first visit with my second husband. We decided to stay in a hotel with a tiny fridge in the 7th arrondissiment (near the Eiffel Tower) and do our shopping at the supermarché. This would save on time and money, since just about everything French tastes good and even the less expensive wines are transporting.

We had a great time, of course, but I was struck immediately by the lack of single use bags. When you grocery shop in Paris, you have to buy a reusable bag. You can’t fall back on single use bags because you decided to be lazy that day. There is no back up plan, so you bring your own, buy a bag at the store, or carry them in your arms.

Back home in West Hollywood, California there was already a campaign underway to rid our community of single use bags. And it was gaining traction. I really wanted to make a reusable bag, but didn’t have the inspiration until that trip.

Single use bags don’t just not break down and then turn into microplastics that pervade our environment (land, water, wildlife, our bodies), they are extremely lazy. I’ve watched people – who work at the grocery store, mind you – take a shopping cart full of groceries and put each piece of grocery in its own single use plastic bag. They are, in my opinion, the penultimate expression of our careless waste and environmental laziness. And it’s a problem that isn’t going away fast enough.

I made a bag in 2012, but the final version was realized in 2013 when my husband also created the name “Degalodi.” We both have Cherokee in our bloodlines, and deep roots in caring about the land from which we came. It was the perfect name and is a beautiful reusable bag!

Then life threw us a few wrenches. We abandoned our project and moved to North Carolina for almost four years, where we tried to pick up our lives anew and take a different path. We visited Cherokee, North Carolina often and tried to figure some things out, but the call was to go back to California. After eight years I came back to Degalodi and what you see below is just the start of a love for reusable bags that is extending itself to other types of bags – all purely vegan, for I think in this day and age, a love for the environment also means a commitment to using non-animal product. There are so many things that can be used for daily items, we don’t need to kill an animal to have something to put our chap stick, sunscreen and money in. 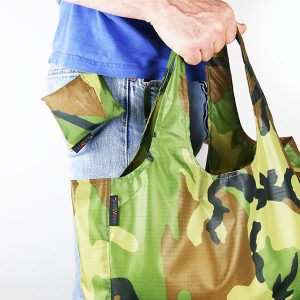 Degalodi bags are made from 100% ripstop nylon that does exactly what is sounds like. The way this nylon is woven together in a crosshatch pattern creates a reinforcement that makes the material resistant to tearing and ripping. They also feature French Seam lining, which encases the raw edge, preventing the fray that is common with raw edges on nylon and also providing an extra line of stitching. Furthermore, it’s intention to keep you from being lazy is realized with its own pouch and aluminum alloy carabiner. No room in that purse for one more item? No problem! Attach the carabiner to your purse handle. Don’t carry a purse? No problem! Attach the carabiner to your belt loop. Don’t like red, blue, green and orange bags? We have camo, and we have black with red stitching – perfect for anyone whose style runs more towards the rustic or chic. 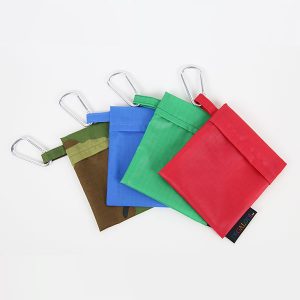 And I don’t just hand make these, myself. I use everything I make for at least a few months before I ever post it for sale. In this case I’ve been using Degalodi Reusable Ripstop Nylon Bags for over six years! They stand up over time and only one has ever fallen apart and that’s because it was the first one I made without French Seams. Function, style, durability and beauty!

I love bike riding and hiking. And I have a friend who swears by holsters. He has two sets – one for outdoor activities, and one for work. The outdoor set is canvas and nylon and the work version is leather. 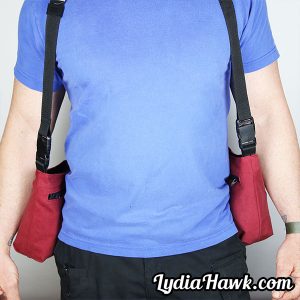 I ride a mountain bike and don’t really gear up the way cyclists so, though I do wear clothing that is tight to my body and a helmet and gloves. I don’t, however, like fanny packs, backpacks and slings. I’d tried a number of different bags/containers because I want to carry essentials on me (chap stick, wallet, keys, Degalodi Reusable Bags for the occasional grocery stop before going home). Nothing really worked, so I made a holster with bags large enough for carrying these smaller items, but after about a month of use, I realized the bags hung too low. Which is perfectly fine for hiking, but not for being on a bike because the bags can hit the thighs and create resistance.

I also had to streamline the straps because I had to many unnecessary pieces on it.

The current version is light, with two sets of parachute buckles on each bag for easy removal and reattachment. 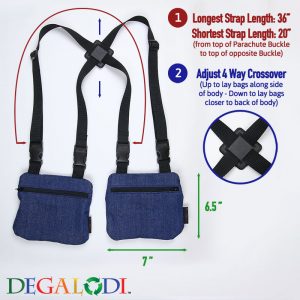 The new straps have one strap adjuster slide on each side and a 4 way crossover in back so that it’s not necessary to adjust the front and back separately. Adjusting the front automatically adjusts the back and slides effortlessly for balance. I’ve found, also, that if I pull the 4 way crossover down in back towards the bags, the bags pull towards the back and away from my sides while biking. If I adjust it up towards the top of my back, it adjusts the bags forward so I can better reach the zippers to get into them.

But they aren’t only great for hiking and biking! I gifted a set to a friend who gardens; another great outdoor activity where hands-free is important, because she needs her phone and other small things on her. I also gifted a set to someone whose mobility issues make it difficult to carry a purse. This person has back issues and the bags have proven extremely convenient and comfortable! 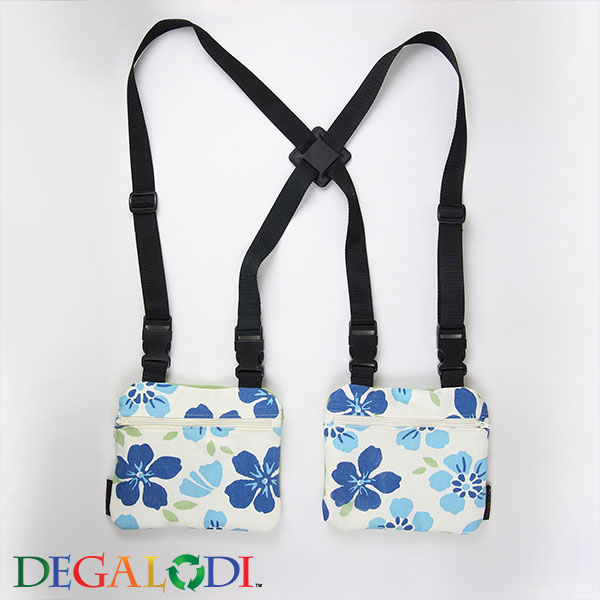 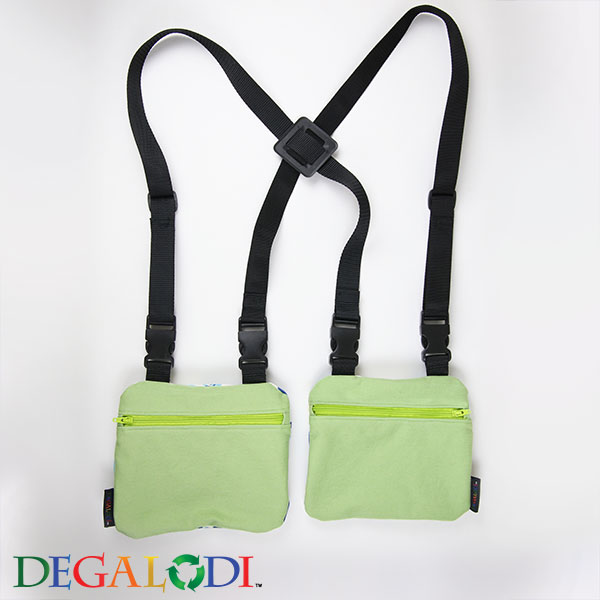 And then there’s the upcycling area of making bags that interests me. For example, the holster bags for my gardening friend are made from upcycled jeans. And they’re reversible! (Hence the paracute buckles, so you can turn them around and switch them out for a different color.)

Right now what I sell is not upcycled jean material, but should I make some to sell, they will be identified as upcycled. It’s fun and it’s environmentally conscious and I invite you to try them, yourself, and give me feedback so I can continue to make functional, premium-style bags for your shopping/outdoor adventures! – Lydia Hawk

“There’s nothing but chemistry here” - Walte

Posting this with permission from @kimmieskeeters

Valentine likes to play love songs on the guitar.